Imaginary Wanderings Society is domiciled in Meggen, Switzerland. The Society creates exceptional print products on culturally important regions and landscapes. Its first edition, No.1, is dedicated to Lake Lucerne and the Gotthard, and will be published in fall 2016. The team consists of Christiane Franke and Yvonne Rogenmoser, illustration and graphic design, and Christina Ljungberg and Barbara Piatti, literary and cultural studies.

In our 4-women team, expertise and experience blend and complement each other ideally: research, writing, illustrating and graphic as well as 3D-printing design. 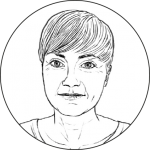 Christiane Franke has a keen eye and a talent for spectacular vintage design. Born in Munich in 1982, Christiane Franke was educated as scientific illustrator at the Zürich Art school and works as an illustrator and graphic artist in Basel. She is responsible for the layout and design of the Swiss magazine “tut” for children and young adults. Many of her illustrations and caricatures have been published, e.g. the series “Seppis Tagebuch” and the Swiss media magazine “Edito + Klartext”. During 2014 and 2015, she developed the main presentation of the interactive project “Schnitzeljagd – A party for art, science and handicrafts” as well as all the advertising and project material. For more information, see www.christianefranke.ch 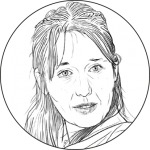 Barbara Piatti knows the best stories and anecdotes around Lake Lucerne and the Gotthard. Dr. phil. Barbara Piatti (b. 1973) is a literary scholar with her own company for cultural projects. One of her recent mandates was to create an interactive literary atlas, www.literatur-karten.ch/de, for the Leipzig Book Fair on behalf of the Swiss embassy in Berlin. She has written several books on Lake Lucerne and the Gotthard. Her latest book is “Es lächelt der See. Literarische Wanderungen in der Zentralschweiz” (2013). From 2006-2014, she led her project “A literary atlas of Europe” www.literaturatlas.eu) at the ETH Zurich Institute for Cartography and Geoinformatics. In 2010, she was awarded a 1-year Fellowship at the Institute for Advanced Studies, Wissenschaftskolleg Berlin. For more information, see www.barbara-piatti.ch. 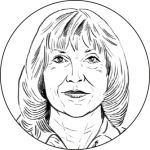 Prof. Dr. Christina Ljungberg is a literary scholar with several years of media experience in Swedish and Canadian film and television. She has been teaching English and American literature at the University of Zurich since 1995. Her many books and articles, most recently “Creative Dynamics” (John Benjamins, 2012) and “Thinking with Diagrams” (De Gruyter, 2016), focus mainly on intermediality and the function of maps and photographs in literature and art. A resident of Meggen/Lucerne for many years, she is a proven expert on Lake Lucerne and the Gotthard. www.christina-ljungberg.ch 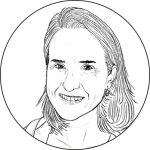 Yvonne Rogenmoser knows everything about Pop Up techniques and other special effects in the art of bookprinting. Yvonne Rogenmoser was born in Zug in 1977. She is a skilled carpenter and also has a degree in scientific illustration. Her diploma project, a Pop-Up book, was a sensation in the way it communicated scientific facts in a playful and unconventional way. For a brief impression, see http://www.yvonnerogenmoser.ch/315207/video-pop-up-buch. Yvonne Rogenmoser works as an independent illustrator. Her mandates reach from cookbooks to ecological projects, and her special interests concern printing techniques. www.yvonnerogenmoser.ch